How to Fail at a Newsletter on Danish Cinema

Back in January, I launched a Tinyletter with the noblest of intentions; Once a month, I would write about a topic I loved, Danish Cinema, with the hope being that my words would inspire you, the reader, to seek out some of films that the “Happiest Country in the World” has to offer.

Then reality struck, and by reality, I mean the last semester of my undergraduate career. In the struggle to balance grades, an internship, extracurriculars, studying abroad over spring break, job hunting, and some resemblance of a social life, sacrifices had to be made. Danish Cinema for Americans was one of those sacrifices.

Flash forward to May 2018: I was a college graduate and unemployed. I assured myself that while I was sending out resumes and cover letters, I would also have plenty of free time to continue my Tinyletter.

And make no mistake, I did. The night I submitted the final paper of my undergraduate career, I began to watch The Commune (Kollektivet), which was to be the focus of DCFA Issue 2. In the next few days, I finished watching it, and wrote 181 words about it. (Some of those words make up this piece’s opening paragraphs.)

Then I stopped working on it.

When I walked across the stage at graduation, I told myself I would finish DCFA Issue 2 before moving back home.

When I moved back home, I told myself that while I was unemployed, I would dedicate myself to, among other things, Danish Cinema.

After two weeks of unemployment, when I name dropped DCFA in a successful job interview (My coworker still can’t believe that I’m a fan of croissant films), I still didn’t finish it.

Now, as summer comes to a close, DCFA Issue 2 on The Commune remains unfinished.

And it will remain so because I have decided to end Danish Cinema for Americans. 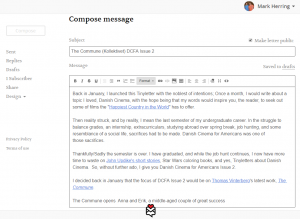 (The Unfinished Draft of DCFA Issue #2)

Back when I was watching The Commune, I repeatedly found myself pausing it to do something else, mainly to check social media. My overall impressions of the film weren’t the greatest, but I still thought I could write about it.  In my mind, any film critic, or wannabe film critic, worth their salt could write a review that analyzes and engages with a film that they didn’t particularly like.

I took me all summer to realize the error of this way of thinking. Sure, it is the job of a critic to analyze and engage with a film; but at its most basic level film criticism is about saying whether you liked or didn’t like a film.  If I didn’t particularly enjoy The Commune, then my first and foremost duty as a critic is to say that.

If I didn’t like certain aspects of it, such as its main character being a 50-something, college professor having a mid-life crisis which results in affair with 20-something student, then I shouldn’t shy away from my dislike of said aspects.

This doesn’t mean that I still can’t enjoy other aspects of The Commune, such as its KILLER SOUNDTRACK, but when I found myself trying to write about The Commune for DCFA I keep thinking “Why? Why should my readers care about this film?”

Sure, I can write a piece of criticism on it, but is that the point of Danish Cinema for Americas? To write criticism for films that I could just as easily publish on Letterboxd?

No. The goal of DCFA, as stated, was to share “A monthy newsletter about Danish cinema from the prospective of a college student who has an odd passion for it despite not speaking a word of Danish.”  When I was writing to try write about The Commune, I wasn’t living up to this goal.

All this means to say, that I want to end Danish Cinema for Americans.

But this doesn’t mean that I’m done writing about Danish Cinema or other pieces of niche cinema.

Instead of continuing DCFA, I plan to launch a new Tinyletter, the Tinyletter that I originally set out to write back in December: Another Underrated List. My goal with this Tinyletter, was to contribute to the glut of internet movie lists by writing about films I considered “underrated”. After the Wedding was to be the first film on this list. Yet, when I was having trouble clearly defining the goal of the Tinyletter, I decided to narrow its focus.

Now, through my failure with DCFA Issue 2, I have found a clear goal for Another Underrated List. Starting in September, I’ll be picking one film a month that I love and, at least from my prospective, seems to have been brushed under the rug by most of cinephilia.

I’m sure this new Tinyletter will eventually contain a lot of pieces on Danish Cinema, so stayed tuned!

P.S. Just because I abandoned an issue on The Commune doesn’t mean you shouldn’t check it out. It’s an interesting little film with a lot to be analyzed in it. Plus, I’ll forever in its debt for introducing me to the band Folkeklubben.  The Commune currently available to stream on Amazon Video and Hulu.